UniFirst No. 9 Chevrolet Driven by Chase Elliott to Make NASCAR Debut in Phoenix on Sunday

, /PRNewswire/ --  (NYSE: UNF), a North American leader in providing customized work uniform programs, corporate attire, and facility service products, in partnership with 12-time NASCAR Cup Series champions , will be debuting the all-new No. 9 UniFirst Chevrolet Camaro ZL1 1LE, driven by most popular driver, ®, on , at . The race begins at and will be televised on . 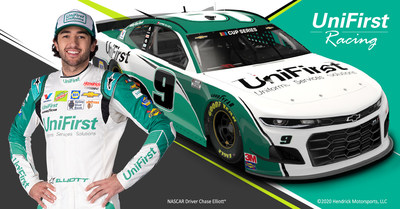 will serve as the primary sponsor of the No. 9 team for three races during the 2020 NASCAR Cup Series season, which began last month with the prestigious DAYTONA 500. The new UniFirst No. 9 race car, as well as Elliott's and the team's uniforms, will prominently feature the company's signature green colors and sleek designs, along with its recently updated corporate logo.

" is thrilled to be a primary sponsor for and the entire No. 9 Hendrick team," said , director of marketing and communications for . "Chase's performance on the track last season was quite impressive with him winning three races and earning the fan vote for 'most popular' driver for the second year in a row. We can't wait to see him behind the wheel of our race car, which looks amazing with its signature green paint scheme."

The 2020 season marks the fourth year of multi-year partnership with . is the Official Workwear Provider of , supplying work clothing and uniforms to the team, as well as to its sister company, , the largest privately held retail automotive organization in .

"The entire No. 9 team and I are looking forward to having on board at ," said Elliott. "I really enjoy racing at that track, so hopefully we can put on a good show for them and all of the fans."

The 24-year-old Elliott, a native of , has earned six career Cup Series wins. Last season, he put together five straight top-five finishes—the longest streak of his career—and secured new career highs with four pole awards and 601 laps led. Elliott qualified for the playoffs for the fourth time in his career, reaching the Round of 8 for the third consecutive season. To top off last year's results, Elliott won the fan vote for the Cup Series most popular driver award for the second straight year—an honor his father, driver , won 16 times.

About
Founded by in 1984, has earned 249 points-paying race victories and a record 12 car owner championships in the premier NASCAR Cup Series. The organization fields four full-time Chevrolet teams on the Cup circuit with drivers , , and . Headquartered in , employs more than 600 people. For more information, please visit HendrickMotorsports.com or interact on Twitter, Facebook and Instagram.