, /PRNewswire/ -- The No. 24 UniFirst Chevrolet Camaro ZL1 will return to the track this , with driver behind the wheel at ROVAL. The 2.28-mile course combines a portion of the traditional 1.5-mile oval with sections of the infield road course and marks the first cutoff race of the 2019 NASCAR Cup Series playoffs. Byron will attempt to lock himself into the Round of 12 during the Charlotte race, which will begin at live on . 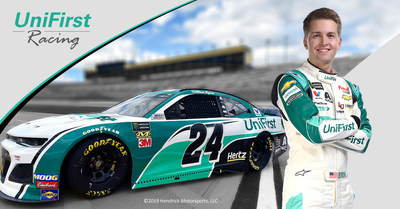 (NYSE: UNF), a North American leader in providing customized work uniform programs, corporate attire and facility service products, is a primary sponsor of the Hendrick Motorsports No. 24 Chevrolet Camaro ZL1 with Byron for three races during the 2019 NASCAR Cup Series season. Charlotte will be the car's second appearance in 2019, having debuted the refreshed No. 24 UniFirst Chevy paint scheme at in May.

At 21 years old, Byron kicked off the 2019 season at the prestigious 500, where he became the second-youngest driver in history to win the coveted pole position. Since then, Byron finished the 2019 regular season having won three additional poles and clinching a berth in his first Cup Series playoffs.

"What an exciting season this has been for ," says , director of marketing and communications for . "Everyone at is especially thrilled to see the No. 24 UniFirst Chevy qualify for and now compete in the NASCAR Cup Series playoffs. We wish the team well and look forward to witnessing William's performance in the UniFirst Chevy in ."

In 2016, and announced an eight-year partnership that runs through the 2023 season. is the official workwear provider of , supplying work clothing and uniforms to the team and its sister company, , which is the largest privately held retail automotive organization in .

In 2018, Byron became only the second driver to win rookie of the year honors in each of three national series in consecutive years – in the Cup Series in 2018, the Xfinity Series in 2017 and the Gander Outdoor Truck Series in 2016. Byron was named the driver of the No. 24 Chevrolet in August 2017.

"I'm excited to get the No. 24 UniFirst Chevy back on track this weekend for the ROVAL," Byron said. "It's one of the best paint schemes we run, and I think it will be great for fans to easily pick out as we race through the course. Last year we had a good run going, and I'm ready to get back to the ROVAL and improve on that. Hopefully we can put on a great show for and our fans."

The final race of the season for the No. 24 UniFirst Chevy will be at on , at televised on .

About :
Founded by in 1984, has earned 255 points-paying race victories and a record 12 car owner championships in the premier NASCAR Cup Series. The organization fields four full-time Chevrolet teams on the Cup circuit with drivers , , and . Headquartered in , employs more than 600 people. For more information, please visit HendrickMotorsports.com or interact on Twitter, and Instagram.